The Psychedelic Furs and Tears For Fears 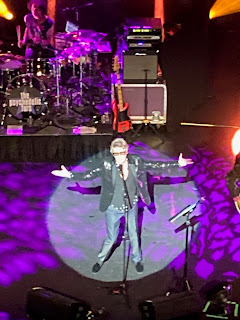 I recently had the chance to see two bands on my bucket list: The Psychedelic Furs at the Apollo Theater and Tears for Fears at the Jones Beach Theater. (At my age, my bucket list consists of bands to see before they die.)

I purchased my tickets for The Furs almost a year ago and their concert was postponed twice, so I was a little bit concerned before I saw them. I’m happy to say that Richard Butler can still kick ass. (Butler strikes me as a cross between David Bowie and Johnny Rotten: a crooner with a punk attitude.) I was mostly pleasantly surprised, but I had two minor disappointments. I’d been looking forward to hearing them play “Love My Way,” but when they played it, it was sort of anti-climactic. The distinctive xylophone part that opens the song was missing, replaced by a keyboard line (How do you play that song without a xylophone?!!!) and the keyboard and drum parts that have been tattooed on my brain were also gone. There was also some kind of sound problem during “The Ghost in You.” I’m not sure if Butler couldn’t hear himself (he kept touching his earpiece, as if he was saying “What the fuck?”) or he was singing to a backing track, but it sounded like two different vocals, and one of them was out of tune. At this point, “The Psychedelic Furs” has several new members, but their drummer, Zack Alford, also kicked ass--this is a rock and roll band! I also liked the song “No One,” from their new album, Made of Rain. Why isn’t WDRE playing it?

Tears For Fears is a different kind of band, but I was also pleasantly surprised. A lot of ‘80s bands have a reputation for being “hair bands” or “pretty boys,” but Tears For Fears are real musicians. They were also backed up by an excellent background singer, Carina Round, who provided great vocals on songs like “Woman in Chains” and “Suffer the Children," the latter of which she sang entirely by herself. Even though Roland Orzabal now looks like Gandalf from “Lord of the Rings,” his voice is still in excellent shape. And Curt Smith (who, I have to admit, really is a pretty boy, even now) also sounded great.

So sometimes you can see your heroes--four decades later--and they (mostly) don’t disappoint.

Posted by thegaycurmudgeon at 8:45 AM