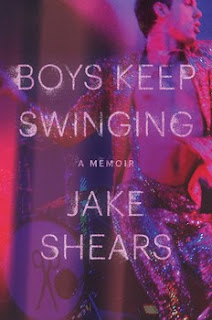 Jake Shears overcame tremendous obstacles to become a rock star. That is both inspiring and depressing. It makes me think that the only people who succeed in show business are those who literally can’t do anything else.
I’m still trying to unpack my emotional and very personal reaction to Jake Shears’ memoir, Boys Keep Swinging.
For those of you who don’t know, Shears is the lead singer of the band Scissor Sisters (and he happens to be starring in Kinky Boots on Broadway right now). Scissor Sisters didn’t make much of a mark in the U.S., but their self-titled debut album was the U.K.’s bestselling album of 2004. I was only familiar with their music because I used to listen to an internet radio station based in London.
It’s a very bizarre feeling to be reading a book about someone famous and come across the names of people and places you know. It makes you feel like something important and exciting was happening right under your nose and you somehow missed it.
As it happens, Shears and I both went to Crunch gym on Lafayette Street at the same time. (I remember seeing flyers for the Scissor Sisters there.) But whereas I had basically stopped going to clubs by the early 2000s, Shears was immersed in the burgeoning “electroclash” scene emerging at clubs like Berliniamsburg in Brooklyn.
Shears says he doesn’t believe in luck, but there are numerous of instances of serendipity in this book. The story of him meeting the head of a record company while working as a waiter at East Village diner Leshko’s and then running back to his apartment to retrieve his record so he could give it to him is right up there with Madonna giving Mark Kamins her demo at Danceteria. (How many people would even know what a record company executive looks like?)
Shears starts out as a bookish creative writing major at The New School and his bouts with insecurity are refreshing—it makes him seem more human. Yet he has no trouble picking up some of the most handsome men in the city (Anderson Cooper and a bartender at The Hangar, among others), or meeting guys at the gym. (I’ve never met someone at the gym in my life!) I’m not being judgmental—I was a slut too in my twenties—I’m just jealous!
There’s another story of him spending a debauched night at the gay bar The Slide the night of New York City’s 2003 blackout and picking up yet another handsome guy. I remember walking out to Christopher Street Pier (and seeing Calvin Klein there) and then going home because I had to work the next day (sigh). Meanwhile, candlelit orgies were going on all over the city!
Reading this book is like reading about people’s carefully curated lives on Facebook, only worse. Because, when he’s not backpacking through Europe (or, later, performing in clubs there), Shears is hanging out in hot tubs on penthouse terraces in New York. (OK, so I went to Europe in my twenties, too—but still. I wasn’t hobnobbing with Elton John, George Michael and Kylie Minogue!)
I’m always fascinated by what makes creative people tick and Shears is no exception. Is it because his siblings were so much older than him or because he got bullied in high school for being gay? Whatever it is, how does someone co-write an album that goes nine times platinum in the U.K.?
After reading this book, I went back and listened to the Scissor Sisters’ first album, and it’s undeniably brilliant. Not only are the songs catchy, but the production, arrangements and vocals are outstanding. And the first track on their second album, “I Don’t Feel Like Dancing” (co-written with Elton John), is ridiculously good. (I lost track of them after their second album.)
All of which is to say that I found this book incredibly fascinating and entertaining.
But I’m still jealous.

Posted by thegaycurmudgeon at 1:47 AM 2 comments: