Welcome to My Midlife Crisis

These are dark days.
I’m currently working as a doorman for one-third my normal salary, because that’s the only job I could get (and I’m probably lucky to have that). I’ve spent the last eight months being stymied by a hiring system that ironically seems designed to keep people like me who “think outside the box” out and to reward cookie-cutter mediocrity (with appropriately mediocre wages).
And every time I open the newspaper or look at the Internet, it seems to be bad news.
Neal Gabler, who was once a TV movie critic (in addition to being a published author), just penned an article in The Atlantic about his financial struggles as a writer and the larger plight of most middle-class Americans today, living from paycheck to paycheck. And this is from someone who’s famous!1
Another article talks about how the suicide rate in America is at a 30-year high. Because of economic forces (among other things), predominantly white middle-aged men like myself have been killing themselves in increasing numbers (mainly with drugs and alcohol, but also with more efficient methods).2
And at the same time that there seems to be an ’80s revival going on3, many icons of that era—Whitney Houston, Michael Jackson, David Bowie and now Prince—are dead.
Meanwhile, in the science fiction-like world of New York real estate, gentrification continues at a blazing speed. The most recent example of this is longtime icon of the Lower East Side, Katz’s Deli, selling their air rights to create a co-op featuring million-dollar studios, while simultaneously destroying every other mom-and-pop store on its block.
And yet, when I walk the streets and look around me, everyone seems to be doing great. Restaurants are full to overflowing (especially now that it’s spring), everyone looks like a supermodel and is wearing the latest designer clothes, my local supermarket is filled with assorted Europeans buying groceries.
“What’s the problem?” you might say.
The problem is that I (and many others like myself) seem to have missed out on this great economy that everyone is talking about.
Sometimes I ask myself, Is this it? Have I just worked my last “normal” job? Am I going to have to content myself with being a service worker from now on? Am I going to have to move into some studio in the Bronx with ten other people?
And what happened to the things that I actually love doing, such as writing and performing? (I can’t perform right now because I’m working nights.) Why am I killing myself just to survive?
And, once again, where’s the outrage? (I’m still getting over Bernie Sanders’s loss in New York’s Democratic primary, despite the fact that Independents weren’t allowed to vote and that 120,000 voters mysteriously disappeared in Brooklyn.)
Maybe people are just in denial, because when something like this happens (i.e., unemployment or underemployment), people seem to think that it’s your fault. As in, what’s wrong with you that you can’t find a decent job, not what’s wrong with the economy or what’s wrong with the hiring system. (Also: It couldn’t possibly happen to me!)
It seems like if you want to get a decent job these days, you have to create it yourself (or, at least, find it before it’s advertised).
Maybe I just need to do a better job of monetizing my “brand,” the way Jimmy Buffet has.4 Jimmy Buffet, whom you may recall as the one-hit wonder who sang “Margaritaville,” has turned that song into a chain of resorts and restaurants. Maybe I need to do the same thing with my brand! (Somehow, though, “The Gay Curmudgeon” doesn’t sound like the kind of thing that would encourage people to relax and spend money.)
Because right now all I have is a spectacular sounding career.
And I can’t use that to pay the rent.

Posted by thegaycurmudgeon at 7:37 PM No comments:

Why I’m Voting for Bernie Sanders 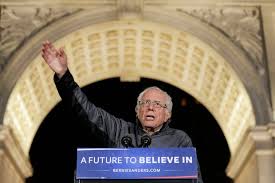 Because my landlord just threatened me with eviction. How’s that for starters?
Because I’ve been engaged in a grueling, white-knuckle job search for the last eight months. Because I’m currently working as a doorman for $10 an hour because my unemployment ran out. Because I’m using credit cards to buy groceries and pay for my utilities, so that I can use all my cash for rent.
That’s how bad things have gotten.
So forgive me if I seem a little impatient for with all these limousine liberals who have the luxury of voting for the pragmatist, the woman who wants everyone to be happy with incremental change, because everything is going great for them.
I’m fucking happy for you.
If you could just step outside your sheltered existence for a few seconds, you might see the reason why 50,000 people gathered in New York City’s Washington Square Park last night, while only 1,300 gathered for Hillary’s dismal event in the Bronx.
Forgive me if I’m not going to just settle for the same old bullshit anymore.
Especially while corporations are sitting on record profits, while most people’s wages have been stagnant for the last 15 years (or gone down). Especially when they’re moving their corporate headquarters to other countries so they don’t have to pay taxes like us little people do.
I’m sorry, but I’ve fucking had enough.
While we’re on the subject of declining wages and disappearing jobs (despite all media coverage to the contrary), lets talk about the sorry state of our so-called “safety net” that’s supposed to help people like me.
While I was still collecting unemployment (which Congress saw fit to cut down to six months because the economy is doing “so well”), I applied for food stamps and was turned down because I made too much money.
I even asked about applying for what’s euphemistically known as “cash assistance” (i.e., welfare), because of the very real possibility that I was going to have no income whatsoever when my unemployment ran out, and was told that—even if I was approved—it would take at least 30 days to process my application.
Gee, what am I supposed to do about eating in the mean time? (Thank God the doorman job came through!)
Which brings me to another subject.
I had been planning to write a whole different post about my actual job search (and I was hoping to have a more triumphant ending by now), but it basically boils down to this:
It’s impossible to find a job these days without a referral. Period.
And if you happen to have the bad fortune to work in an industry, like mine, that has fallen off a cliff in the last few years, too bad for you—because all your contacts are probably going to be in the same boat as—if not worse off than—you are.
If the government really cared about finding people jobs, they would have programs to retrain people. They would spend money on things like fixing our crumbling infrastructure to actually create jobs.
Hmmm… whose platform does that sound like?
Bernie Fucking Sanders—that’s who!
So, on Tuesday, I hope you’ll join me, and millions of other New Yorkers like myself, in voting for Bernie Sanders in New York’s Democratic primary.
I’m hoping my financial situation will improve in the very near future. But I’m not willing to wait another four years to say that about the United States.
Posted by thegaycurmudgeon at 2:19 AM No comments: