Curb Your Enthusiasm Is Why Red America Hates Us 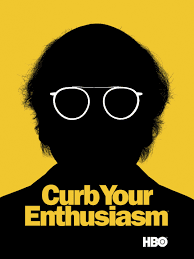 I’m going to say something that’s probably going to get me into a lot of trouble with the circles in which I travel (comedians, New Yorkers, Jews): I’m struggling to like Curb Your Enthusiasm.

Now mind you, I’m one of the biggest Seinfeld fans on the planet. I’ve seen every episode at least five times and continue to watch it. I can recite many episodes verbatim.

So why am I struggling with Curb, which was created by and stars Seinfeld’s co-creator, Larry David? I think it comes down to this:

Larry David made $250M* from selling Seinfeld’s syndication rights and I just keep asking myself, What problems could someone with $250M possibly have?

But maybe that’s the point of Curb: Even if you have $250M, you still can’t escape the minor nuisances of everyday life (but they are minor).

There’s a certain tone-deafness about the show that I think the creators aren’t aware of, especially in these woke times.

For example, what was the big problem on last week’s episode? Larry spilled a glass of wine on someone’s couch. Without even thinking, he offered to pay to have the couch cleaned, whereas I would be horrified by the prospect of having to pay for something like that. (That’s the thing when you have money: you can almost always buy yourself out of any problem.)

Even something as seemingly innocuous as Larry watching a concert from a private box at the Greek Theatre with a bottle of wine and his celebrity friend, Albert Brooks, kind of rubs me the wrong way.

Compare this to Seinfeld, where you have four more or less middle-class characters and an assortment of quirky New York types (none of whom could exist in post-’90s, gentrified New York). I think this is more relatable to most people than Larry David’s cushy existence (although I’m still surprised people outside of New York City even watch Seinfeld).

I’m experiencing my own “wokelash” in light of last week’s election. Even I have become more concerned lately about quality of life issues and voted for Eric Adams precisely because he's a former policeman.

What this last election demonstrated is that the so-called “elites” are out of touch with middle America. The whole country has become siloed in their own information bubbles, so we’re frequently not aware of what people outside our bubble are thinking.

So that’s my woke analysis of Curb Your Enthusiasm.

Don’t even get me started on Succession!

* The syndication of Seinfeld earned David an estimated $250 million in 1998 alone. This amount has been steadily decreasing each year, but payments will continue until the full $1.7 billion from the original syndication deal has been paid. (from Wikipedia)

Posted by thegaycurmudgeon at 9:10 AM No comments:

Dancer from the Dance: Gay Period Piece or Gay Classic?

It’s hard to believe that it’s taken me this long to get around to reading Andrew Holleran’s landmark gay novel, Dancer from the Dance, more than 40 years after it was originally published. It’s only because I saw someone reading it outside a coffee shop in the West Village and I was shocked that it was still in print, and even more shocked that the person reading it was at least 30 years younger than me. When I first moved to New York City 40 years ago, the world that Holleran writes about—the world of gay “clones” who went to gay discos like The Saint—was already starting to disappear.

At that time, there were two distinct gay subcultures: the aforementioned clones, who generally were in their 30s or older and lived in the West Village, and new wavers/punks (like I was shortly after this book was published), who were generally in their 20s and lived in the East Village. (Gay artist Keith Haring even used to spray paint walls and sidewalks in the East Village with the phrase “Clones Go Home.”)

You may wonder, then, why I read a novel like Dancer and why I think it’s so important. It’s because many of the gay men from the generation that Holleran is writing about died of AIDS, so this is like a historical record.

I’m disappointed that Holleran didn’t use the names of real people and places more frequently, like Martin Belk did in his book about New York’s gay scene in the 1990s, Pretty Broken Punks (but that was more of a memoir). It’s only because of books like Tim Lawrence’s Life and Death on the New York Dance Floor: 1980–1983 that I’m familiar with early New York discos like Flamingo and 12 West. (Is Dancer’s “Twelfth Floor” disco based on 12 West?)

Normally, the previous generation of gay men would have passed this information on to the next generation (along with other important cultural information, like which movies you should see and which books you should read), but because of AIDS, many of these men died before they even reached middle age.

So thank God for novels like Dancer that preserve this history. The fact that one may not recognize the names of certain people and places may, in fact, make it even more universal. (Certainly, that was my hope when I changed the names of people and places in my gay coming-of-age novel, New York Trilogy. That and the fact that I thought that that was what you were supposed to do in a novel.)

Much like Larry Kramer’s Faggots (another important novel of this period), Dancer is about a gay man, Malone, looking for love in a gay subculture defined by promiscuity. What makes his search even more poignant is that he’s described as being impossibly beautiful, as well as a perfect gentleman. (Indeed, beauty may be the real subject of Dancer.)

However, as was common in many gay works of this era, the story is ultimately tragic. (If you’ve seen the excellent documentary, The Celluloid Closet, based on Vito Russo's book, I don’t think I’m giving away any spoilers here.)

What makes the book worth reading, apart from its historical value, is that it’s beautifully written and its characters are unforgettable. The gay beauty, Malone, is a Gatsby-like figure, an unattainable object of desire. (The scene describing his clothing reminds me of a similar scene in The Great Gatsby describing Gatsby’s shirts.)

Equally memorable is his tour guide to the gay scene, Sutherland, a classic jaded queen. (Think Harold in The Boys in the Band or Richard E. Grant’s character in Can You Ever Forgive Me?)

In spite of all this, I found Dancer to be profoundly depressing because, ultimately, it’s about aging and death.

It is also, however, a masterpiece.

Posted by thegaycurmudgeon at 7:30 PM No comments: