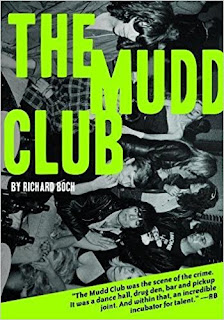 My memories of the Mudd Club (which I apparently didn’t start frequenting until after it was no longer cool) are as follows: 1. The bartender refusing to wait on me because I was so young and naïve, I didn’t know you were supposed to tip him. 2. Peering over the DJ booth to find out who was singing what I thought was one of the greatest pop songs I’d ever heard. (It was the Go-Go’s singing “Our Lips Are Sealed.”) 3. Entering a DJ contest whose winner was—to my knowledge--never announced. (I figured they were just trying to fill the dj slot for the night.) 4. Seeing Men Without Hats before “Safety Dance” became a huge international hit. (I also saw the Bush Tetras there, when their “Too Many Creeps” was big in the clubs.)
Richard Boch remembers considerably more, which is quite remarkable considering the amount of drugs he consumed.
His great new book, The Mudd Club, is both a celebration and an elegy. It takes us back to a time before cell phones and the Internet, when you could still rent a Tribeca loft for a few hundred dollars, and when lower Broadway was a deserted no man’s land rather the pedestrian-clogged shopping mall it is today.
As Boch himself is the first to admit, he just happened to be in the right place at the right time. A friend of his who worked at the Soho Weekly News referred him to Mudd Club owner Steve Mass because she said he “knew everyone.”
And while being a doorman might seem like a stultifyingly boring job (or premise for a book), Boch points out that being the doorman at the Mudd Club gave him the opportunity to meet some of the most interesting people in New York.
One of the amazing things about this book is the sheer level of detail in Boch’s recollections. You have to wonder, “Did he keep a diary?” If you’ve never been to the Mudd Club—or even if you have—this book will give you the sensation that, as the old TV show used to say, “you are there.”
What made the Mudd Club special was the sense that anything could happen there. You could see the Psychedelic Furs, Talking Heads, or B-52s there one night and some obscure local performance artist the next, to say nothing of the various theme parties that took place. (“Soul Night” and “Rock ’n’ Roll Funeral” are just two stand-outs described in this book.)
To read this book is to realize just how far New York (and by New York, I mean  Manhattan) has fallen from its creative peak.
The Mudd Club adds to an important body of work (including such books as Tim Lawrence’s Life and Death on the New York Dance Floor, Martin Belk’s Dirty, Broken Punks and, dare I say, my own New York Trilogy) documenting New York’s club scene in the late ’70s, ’80s and ’90s—a unique period that will never happen again.
Welcome to the club, Richard.

Posted by thegaycurmudgeon at 2:00 AM No comments: