Welcome to My Midlife Crisis, Part 3: The Clock Is Ticking

Yesterday I had another one of those days (which I’ve been having a lot of recently): a culture-filled day that turned into yet another reminder of that existential reality: the clock is ticking.
It started out at Howl! Happening, an East Village gallery that opened up in one of those newly constructed luxury buildings that have been popping up all over the East Village lately. The gallery was created by Arturo Vega, the former art director for The Ramones (he created their famous logo, among other things), someone I knew from the years I used to hang out at The Bar on East 4th Street. The gallery itself is a reminder that Manhattan has turned into a museum, a memorial to all the great things that used to happen here. But the places where those things used to happen have been bulldozed to make way for the yuppie hordes who now live here and are trying to recreate their suburban childhoods.
But I digress.
Anyway, the current show is called “When Jackie Met Ethyl” and it features videos and artifacts from performances by two legendary drag queens/actors, Jackie Curtis and Ethyl Eichelberger. Jackie was, of course, one of Andy Warhol’s “superstars” and Ethyl was an accomplished actor, playwright and wigmaker whom I think I first saw perform at the Pyramid, but who eventually appeared on Broadway and HBO. I was lucky enough to catch one of Ethyl’s last performances at PS122. I’ve been racking my brain trying to remember what it was. I think it must have been Leer, his interpretation of Shakespeare’s King Lear, but I remember that it featured him playing the accordion. (That was one of his trademarks.) He eventually committed suicide after being diagnosed with AIDS.
While I was at the gallery, one of the people working there mentioned that they were going to be streaming a memorial service for Holly Woodlawn (another of Warhol’s superstars) that was taking place at the LaMama theater a few blocks away.
Without even thinking (or having an invitation), I ran out of the gallery to LaMama and insinuated myself into the line of mourners for Miss Woodlawn. (I’d like to think she would have approved.)
The memorial service was a Who’s Who of downtown New York and off-off-Broadway: Penny Arcade, Michael Musto and others. Some of them I knew personally or from their work, others I had only read about (including at the gallery show I had just seen).
Memorials like these are a sort of uncomfortable mix of stargazing, legacy-building and genuine emotion. The memorial service was being streamed all over the world and there were people taking pictures and filming both officially and unofficially (i.e., on their cell phones, for future Facebook postings, no doubt). I must confess that I myself took one photo before the ceremony started, but I wanted to be respectful.
Even though I didn’t know Woodlawn personally (as many of the people in attendance did), I found myself very moved. In fact, there was one point when the Lavender Light Gospel Choir started singing that I began crying uncontrollably (much to my own embarrassment). I think this was because they were singing a religious song (after an amusing rendition of “Walk on the Wild Side”) and, in contrast to all the light-hearted remembrances that had come before, it brought home the reality and enormity of the fact that someone had actually died.
The final stop on my cultural tour was a book reading and signing by a writer, Martin Belk, who happens to be a Facebook friend of mine and also happens to be one of the few people I know who’s read my book. While we’ve corresponded and I’ve followed his Facebook posts for many years, this was the first time we had actually met. (He lives in London.)
I was very impressed by both the quality of what he read and the mere fact that he had written this book, gotten it published and was now having a reading and book signing in New York City.
Reading his biography in the program afterwards, it seemed to me that he had really gotten his life together and figured out what he wanted to do with it. He’d completed his B.A. at night while still living in New York City, had moved to Scotland to get his master’s degree and was currently working on his PhD.
As my job search slogs into its ninth month, I’ve been having serious questions about my own life choices. I thought that at this point in my life, I’d be doing something much more meaningful and exciting than just struggling to find a job to pay my rent.
And I’m starting to question my artistic choices, as well. I’m not even sure of the best way to express myself anymore.
In addition to writing this blog, I’ve been writing and performing stand-up comedy for the last 15 years. But in the last two months, with all the stress of my job search, I’ve completely lost my sense of humor. (The shitty spring weather we’ve been having hasn’t helped, either!)
My experiences yesterday reminded me once again that we’re all on this planet for a very short amount of time. As my writer friend quoted one of his teachers saying: “You have the rest of eternity after you’re dead to do nothing. But right now, you better get on with it!”
Posted by thegaycurmudgeon at 1:28 PM No comments:

Welcome to My Midlife Crisis, Part 2: The Nostalgia Continues 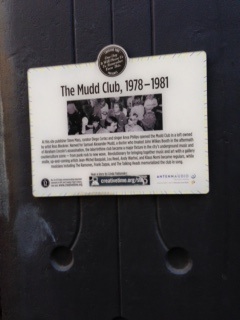 Today I went to a gallery in Chinatown to see a show by the actor and artist Duncan Hannah, who was in Jim Jarmusch’s first film, Permanent Vacation. The woman running the gallery (who seemed to be about 25) was wearing a T-shirt that said “I’m OK, You’re OK.” I told her that this was the name of a self-help book in the ’70s that I actually read. She was not aware that she was wearing the name of a best-selling book, even though her shirt had the same typeface and logo as the book’s cover.
But this should have been no surprise.
Since I was in the neighborhood, I decided to walk by the former site of the Mudd Club, which now has a plaque to commemorate its place in music history. How many weekends did I walk from my apartment on East Fourth Street to that building down on White Street? Too many to remember. (At a certain point, however, even the Mudd Club wasn’t cool enough for me, so I used to bide my time at my apartment until the after-hours club Berlin—at 622 Broadway—would open.)
Walking north from White Street, I passed another landmark from my life, the former site of the Rock Lounge at 285 West Broadway, the first “new wave” club I ever went to. I was tempted to take a picture of that, as well as of the former site of Sohozat, the book and zine store that used to be on West Broadway across from the empty lot that is now the Soho Grand Hotel, but once you start going down that path, where does it stop?
I passed some newly constructed luxury buildings on West Broadway and spoke briefly to a man who was trying to attract customers to his clothing store. I told him that I live a few blocks away, but that I hardly walk down West Broadway anymore because it’s nothing but Eurotrash. He laughed. (Who among these arrivistes would remember that the Eileen Fisher store was once a Chinese restaurant called Oh Ho So? Who can even imagine a Chinese restaurant in Soho now?)
Continuing on to the West Village, I walked down Bleecker Street between 6th and 7th Avenues. I can remember when there used to be a used clothing store near the corner of Bleecker and Leroy Streets (where I used to buy many of my clothes in the early ’80s) and Bleecker Street Records was across the street. It was like a miniature universe peopled by nothing but musicians and music fans! Where are those people now? Do people still wear metal buttons with the names of their favorite bands on their vintage overcoats? If they did, they would look ridiculous on the streets of today’s designer-dressed Manhattan.
Last night, I saw a movie called A Bigger Splash, which features a scene of Ralph Fiennes dancing wildly to the Rolling Stones song “Emotional Rescue.” It’s one of the most thrilling film moments I’ve seen in a long time, and not just because of the wild abandon with which Fiennes dances, but because I distinctly remember buying that album the first summer I lived in New York City and hearing that song brought me right back to that first carefree summer of 1980.
When I look at my life now, I’m reminded of that line from the Talking Heads song, “Once in a Lifetime”: How did I get here?
How is it that I had more fun in New York City 30 years ago when I had less money, than I’m having now?
Maybe it’s because 30 years of deficit spending has finally caught up with me at the same time that the jobs I used to have are disappearing.
Or maybe it’s because New York is just a less fun city.

Posted by thegaycurmudgeon at 7:54 PM 2 comments: