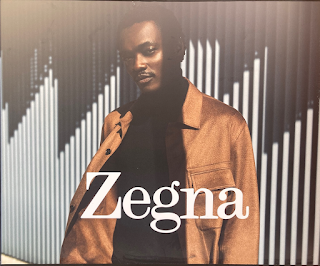 Nowhere is the collision of nouveau riche and street trash more obvious than at the San Gennaro Feast. Around the corner from where a new Zegna store (home of the $6,000 suit) is opening, there are open vats of boiling oil and fried everything you can think of (not to mention literal street trash).

Of course, the San Gennaro Feast is a shadow of its former self. It’s no longer the crowded free-for-all that opened Martin Scorsese’s Mean Streets.

In fact, Little Italy (or Nolita, as it’s now called in real estate parlance) is a shadow of its former self. I sometimes joke that Little Italy is now just two old Italian ladies holding hands.

Even the Italian American Museum, which stood on the corner of Grand and Mulberry Streets, was torn down to make way for luxury apartments. Fortunately, it will occupy a space in the new building. (Every organization has learned that its most valuable asset is real estate.)

The neighborhood is clearly in flux.

When I first moved here 34 years ago, nobody even knew where Nolita (or Little Italy, as it was then known) was. It was basically a neighborhood of truck stop diners. I had a diner on every corner, two Korean delis, a newsstand and a laundromat—everything a good neighborhood needs—all practically on the same block.

Now are no diners, one deli, and the newsstand and laundromat have relocated a few blocks away. They’ve been replaced by expensive restaurants and boutiques which come and go faster than one can keep track. At one point there was a high-end kitchen and bathroom store around the corner from my apartment, but they soon went out of business. I guess there wasn’t a strong enough market for designer shower heads.

Spring Street Natural Restaurant, which had been in the neighborhood since the ’70s, tried to relocate several years ago and then closed. Their former space then had a rotating series of restaurants, none of which caught on. It’s now covered with graffiti. The street in front of where it stood has become a de facto skateboard park, with young men skateboarding at all hours of the day and night.

Another beloved restaurant, Mexican Radio, (which I’ve written about on this blog*) also closed a few years ago and was replaced by an Israeli restaurant that has basically commandeered all of Cleveland Place, blasting their music for an endless stream of millennials.

It’s hard to cheer for New York’s comeback when it seems to be simultaneously self-destructing. The long-foretold (by Republicans) “return of the ’70s” (aided and abetted by our do-nothing police department) seems to be happening at the same time as ever-more-luxurious high-rises are sprouting on every corner.

Bloomingdale’s windows are celebrating the return of Broadway even as theater owners are holding their breath to see if they sell any tickets.

I guess it really is a tale of two cities.

I just haven’t decided which one I live in yet.

Posted by thegaycurmudgeon at 6:58 PM No comments:

I’ve often written on this blog about how I’ve sometimes felt like I was born too late. Usually, it’s been about missing out on New York’s punk rock/new wave music scene in the ‘80s. This feeling was reinforced last week when I went to see an excellent show at the Museum of the City of New York: New York, New Music: 1980-1986.

In reality, I caught the tail end of this scene, as I moved to New York permanently in 1981 and also lived here during the summer of 1980, but I sometimes feel like I was either too young or too broke (or both) to truly enjoy it.

I was particularly struck by how many live music venues there were in Manhattan in the ‘80s and how, on any given night, you might be able to see acts like Madonna, Kid Creole and the Coconuts or Madness, sometimes all on the same night (or even in the same venue).

I wouldn’t even know where to see live music in Manhattan nowadays!

I was struck by a similar feeling about the comedy world yesterday when I met a woman and she told me her husband was a stand-up comedian in the ’80s and, in fact, that they’d met at a comedy club.

She said that he was part of a group of comedians that included people like Jerry Seinfeld and Ray Romano who made the circuit of clubs like The Comic Strip, Catch a Rising Star, The Improv and Dangerfield’s and then moved to Los Angeles, where they were all offered sitcoms! (Well, not exactly, but you get my drift…)

Back then, she told me, it was possible to make a decent living as a comedian performing at gigs around New York City, making maybe $100 a spot. (Granted, the cost of living was a lot cheaper then, too.)

She told me about how Pat Benatar and Patty Smyth were waitresses at comedy clubs back in those days. (They both went on to become rock stars, of course.)

And that makes perfect sense. Because comedians in the ’80s were like rock stars. The country was in the midst of a comedy boom, which eventually led to hundreds of comedy clubs across the country. That boom eventually went bust, when cable TV arrived on the scene and people suddenly realized they didn’t have to leave home to see a comedy show. (And it didn’t help that club owners were booking everyone who thought he or she could be a comedian.)

Back in those days, this woman told me, there were maybe 100 comedians in the entire country and they all knew each other. I replied that I personally knew 1,000 comedians just in New York City and that, not only were none of us getting paid, but we had to pay in order to perform. (Either that or do “bringer shows.”)

But I shouldn’t feel too sorry for myself.

Tonight I’m going to see a comedian who’s celebrating his 87th birthday and didn’t start doing comedy until he was 80. He’s going to be performing at The Comic Strip, where people like Jerry Seinfeld and Ray Romano started out (and I recently started performing myself).

And we’re going to try to recreate that feeling of camaraderie that existed in the ’80s.

Even if it’s just us comedians.

Posted by thegaycurmudgeon at 9:09 AM No comments:

The coronavirus pandemic has really laid bare the gaping economic inequality in our country. We’ve seen how “essential workers” have had to put their lives at risk because they couldn’t afford to not work and didn’t have jobs that enabled them to work from home.

That economic inequality was recently further underscored by Hurricane Ida, when these same “essential workers” had their homes destroyed (and, in some cases, died) because they’re forced to live in substandard (and illegal) basement apartments.

And yet we persist in believing in the “American dream,” the idea that if you just get an education and work hard you will be afforded a middle-class life.

My own experience illustrates that this is not the case. I’ve spent my entire life struggling just to stay in place.

While I wouldn’t compare my circumstances to those of the immigrants who keep this country fed, I have often found myself in the same precarious economic situation as them. As a white male, you would think I’d have it relatively easy, and perhaps I have had it easier than some people because of this fact. But in other ways, I’m at a disadvantage.

The fact that I’m older means I’m a victim of age discrimination, an epidemic that is raging unchecked in this country.

I’ve also lost probably tens of thousands of dollars in lifetime earnings because I wasn’t able to finish my college degree. I was the valedictorian of my high school class and I had a full academic scholarship. But because I had used up my student loan money, I was forced to drop out.

It’s been shown that an academically inferior student from a wealthy family has a better chance of graduating college than an academically superior student from a poor family. (I believe it’s not so much the educational opportunities that have caused this loss of income as the networking opportunities.) And that crucial fact at a critical time in my life has probably left me permanently poorer.

It’s only because companies are now having a relatively hard time finding workers that they are beginning to re-examine their hiring practices regarding requiring a college degree for jobs that clearly shouldn’t require them.

So, as we celebrate Labor Day, I just want to point out the glaring inconsistencies between what we think America is and what it really is. Our so-called social safety net is among the worst in the civilized world.

We’re still the only advanced country in the world that doesn’t have public healthcare.

Our unemployment system was woefully unprepared to deal with this epidemic. From not getting people their benefits on time to not even being able to answer a question (because you couldn’t reach them by phone), our various Departments of Labor were overwhelmed.

And many Americans (including me) won’t be able to afford to retire, assuming Social Security even has any money left.

That’s why I say we have a “lottery-based” economy. Because for millions of Americans, the only possibility of improving their economic circumstances is, literally, winning the lottery.

Posted by thegaycurmudgeon at 10:00 AM No comments: