The Last Shower at Splash 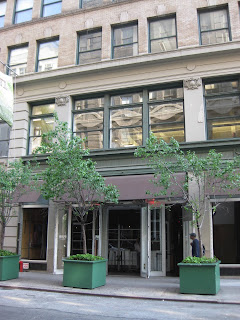 I remember when I first heard that Splash was opening up in 1991. I had been going to Uncle Charlie’s in the West Village and the word on the street was that the gay scene was moving to Chelsea. In the last 20 years, I’ve seen the gay scene move from the West Village to Chelsea to Hell’s Kitchen as each succeeding generation of gay men prettied up the neighborhood, increased real estate values and watched straight people take over our turf. Of course, it didn’t help that a lot of us were also dying of AIDS.
One of the features that defined Splash (apart from the go-go dancers dancing under shower heads) was their videos. I think their most famous video was a scene from Mommie Dearest where Faye Dunaway, as Joan Crawford, slaps her daughter. They had spliced together a series of these slaps so that it became a veritable windmill of slapping. The boys ate it up. There’s nothing quite like being in a room full of grown men and watching them all scream in unison: “Don’t fuck with me, fellas!”
I can’t say that I was ever really a Splash boy. (In keeping with the gay community’s emphasis on youth, all men are “boys.”) It was a bit too preppy for me, a bit too upscale at first and, later, too bridge-and-tunnel.
But I feel sorry for the generation of gay men that’s coming of age now. (Hell, I feel sorry for the generation of people that’s coming up age now.) It seems like, as a society, we’re becoming more and more isolated the more social media claim they’re bringing us together. It’s one thing to post your “likes” on Facebook and it’s quite another to be in a room full of flesh and blood human beings expressing them. I feel like our lives as gay men are being reduced to a sexual act and there’s no more room for witty conversation, something for which we used to be famous.
I go back, once again, to one of my favorite experiences at Uncle Charlie’s, watching the season finale of Dynasty where the entire cast was gunned down. If that were on TV now, we’d all rush to our computers or cell phones to tweet about it, each of us isolated in our solitary apartments, alone in a city of eight million people. Our shared experiences are now virtual.
I prefer to live in the land of flesh and blood.
Posted by thegaycurmudgeon at 8:51 AM No comments:

America Is a Third World Country

America is a Third World country and it’s time we stopped kidding ourselves that it’s not. If the definition of a Third World country is a country where the top 1% controls everything (including the government), we have long since reached that point.
The top 1 percent of Americans owns 40 percent of the nation’s wealth[i]. Most CEOs took home an average 379 staffers’ worth in base pay[ii]. Just six Walmart heirs have as much wealth as 30% of Americans[iii].
There’s always been rich people. But the rich today are so much richer than before and power has become so consolidated in so few hands, it’s become impossible for anyone who is not born rich to get ahead.
Even Obama, who was elected on a platform of “change,” has stacked his cabinet with Goldman Sachs executives. So even our government, which used to be the only means available of leveling the playing field somewhat, has become useless.
Everywhere I look I see evidence that proves our Third World status. Whether it’s the book The Unwinding[iv], the documentary Two American Families[v], the daily articles I read in the New York Times or the evidence right in front of my eyes, there’s no denying that we’ve reached a point where the American Dream is dead and there’s no turning back.
This is especially evident if you’re not working 9-5. If you’re working 9-5, you’re shielded from a lot of the worst evidence of America’s decline. But if you’re not working 9-5, it’s amazing the people you see on the streets and on the subway. Hispanic women selling fruit on street corners, Asian women collecting bottles, young African-American teenagers selling candy on the subway. These are the job choices we’re offering people.
Even if you’re a college-educated white male like me, your options are dwindling.
When I first started working, it was still possible to get a so-called “permanent” job. Now companies can’t commit to more than three months at a time, if that. The fastest growing segment of the economy is temp workers[vi]. So-called “permanent” jobs are disappearing and they’re not coming back.
Today, I saw a post on Facebook saying that Manatus, one of the last existing diners in lower Manhattan, is being turned into a Calvin Klein store. Rents on Bleecker Street, formerly a quaint, residential street in New York City’s West Village, now surpass rents on Bond Street in London and Rodeo Drive in Los Angeles, according to the Web site Jeremiah’s Vanishing New York[vii].
A few days ago, there was an article in the New York Times about a bidding war for a $595,000 studio in the West Village[viii]. According to the article “it was the only condominium for sale in the West Village for under $600,000.”
And nowadays, even if you’re rich enough to be able to afford a $595,000 studio, the competition to buy that studio is so intense that you can’t really afford it unless you can afford to pay all cash. Because you’re not just competing with rich New Yorkers, you’re competing with rich people from all over the world, who will probably only be using the apartment as an investment or, at most, a pied-à-terre. There are now entire buildings, if not entire neighborhoods, in cities like New York[ix] and London[x] that consist of these uninhabited investment apartments.
My best friend (another college-educated white male like me) recently had to move back with his sister in Virginia because his landlord stopped accepting the rent he was paying on his sublet. He and my other best friend (also college-educated) have both been unemployed for over a year. The only reason I’m still living in New York City is because I’m rent-stabilized.
So let’s stop kidding ourselves that America is the “land of opportunity” and New York is the “city that never sleeps.” Because neither of those statements has been true for at least 20 years.