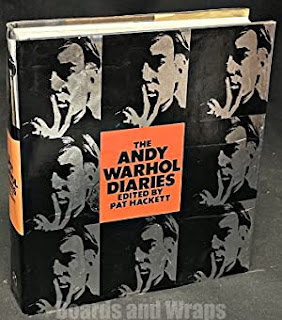 I just finished rereading The Andy Warhol Diaries after having seen the Netflix documentary series of the same name. I have to say, it was mostly filler, which makes the Netflix doc’s accomplishment even more remarkable. By focusing on Warhol’s relationship with Jed Johnson, an interior decorator, and Jon Gould, a movie producer at Paramount, the documentary succeeded in somewhat humanizing Warhol, who always presented himself to the public as a somewhat asexual person (even though his art had an extremely gay sensibility).

He was also very insecure about his position in the art world, constantly comparing himself to contemporaries like Jasper Johns and Robert Rauschenberg and members of the new guard like Julian Schnabel and Jean Michel Basquiat, with whom he had a close relationship and on whom he seemed to have a kind of crush.

Another revelation is that Warhol comes across in his diary—especially reading it in “woke” 2022—as someone who was racist, sexist, anti-Semitic and (ironically, since he himself was gay) homophobic. The most charitable explanation I can come up with (not that I condone such behavior) is that he was a product of his time and upbringing. The other explanation is that I don’t think this diary (as the word implies) was intended for public consumption; it was mainly a means of keeping track of expenses, which he details meticulously. (The shocker here is that his cab fare was often what it costs just to get into a cab these days!). But, hey, even I have been known to make the occasional off-color (no pun) remark in private.

The main value of this diary is that it records what I think of as the last great creative period in New York City’s history—and by “New York City,” I mean Manhattan. That’s because this was the last time in which artists could actually afford to live in Manhattan.

It’s also the last great period of sexual freedom, coming as it does before the AIDS crisis, which looms heavily over this book. (Jon Gould is only one of the many people in this book who died of AIDS.)

Ultimately, though, Warhol remains an enigma. Someone who was obsessed with fame, wealth and celebrity (which were often the subjects of his work) and at the same time was filled with existential dread (which could be seen as the theme of his skull and shadow paintings). His life can seem either glamorous and exciting or meaningless and empty, depending on how you look at it.

Even so, I’d trade places with him in a heartbeat.

Posted by thegaycurmudgeon at 10:22 AM No comments: