Why Fun Gallery…the True Story Is a Must-Read 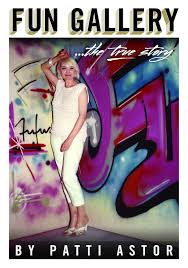 The other day I walked into an art gallery in Soho, an unusual circumstance in and of itself. I flippantly remarked, “I haven’t seen an art gallery in Soho in 50 years!” (That was a slight exaggeration. It was more like 40 years ago—when I first moved to New York City—that art galleries were still a major feature of Soho.) I continued, “You should see what I’m reading,” and I held up a copy of Patti Astor’s Fun Gallery…the True Story for the three millennials working there. They stared at me blankly. They had never heard of either the Fun Gallery—the gallery that started the East Village art explosion of the 1980s—or Patti Astor, its owner. (It’s always amazed me how young people have absolutely no curiosity about anything that happened before they were born!) I looked at some photos that looked like they were by Ryan McGinley (they were actually by someone I never heard of) and left.

Patti Astor, as mentioned, was the owner of the Fun Gallery. I lived next door to the gallery’s second incarnation on East 10th Street between First Avenue and Avenue A in the early ’80s (in actor Steve Buscemi’s old apartment, I might add). It’s hard to describe how important and exciting that time period was to people who didn’t live through it. At that time, it seemed that everyone in New York City was an artist, musician and filmmaker. (I was familiar with Astor herself from her appearances in a number of independent, low-budget films by underground filmmakers like Amos Poe.) But one of the joys of reading this book is learning about what an interesting life Astor led before she even moved to New York City or opened the Fun Gallery.

She takes us through her experiences in the ’60s working with the radical student group SDS (Students for a Democratic Society) while she was a student at Barnard, as well as her trips to Paris and San Francisco. Reading these passages, I was simultaneously green with envy and awestruck. Astor was a renaissance woman before she even looked at a painting!

I’ll never forget the second Fun Gallery’s opening night. The gallery’s windows were covered while they were preparing their first exhibition and when they were finally uncovered, it was a Kenny Scharf day-glo extravaganza! The crowd spilled over onto the sidewalk and into the street! It was a party atmosphere!

With all the galleries opening in the East Village, there was a sense that anything could happen. You would take the subway and see Keith Haring’s latest chalk drawings or walk down the street and accidentally stumble upon one of Richard Hambleton’s shadow paintings leaping out at you. The next thing you knew, Jean-Michel Basquiat and others were being scooped up by Soho galleries and making fortunes. Within a few years, the East Village gallery scene would go bust and even the Soho galleries would eventually move to West Chelsea.

Reading this during the current shutdown and pandemic, I’m left wondering if it’s possible that New York could have another renaissance, like it did in the ’70s, when Manhattan was still cheap enough for artists to live here. On the one hand, there’s been an explosion of street art (and I’m not just talking about well-known figures like Banksy). On the other hand, Manhattan has been so ridiculously gentrified that even a terrorist attack couldn’t undo the damage that’s been done.

But once upon a time, in the early ’80s, you could support yourself as an artist in Manhattan and the air seemed ripe with possibility.

Posted by thegaycurmudgeon at 11:57 AM No comments: