Lining Up to Be Stupid 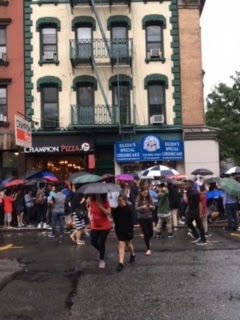 Yesterday I was awakened by the sound of screaming coming from outside my building. It sounded like either a rock concert or a mass shooting, so I looked out my window, but I couldn’t see anything. When I left my building to buy a newspaper, my path was blocked by a line of people, mostly teenagers and children, some with their parents. I asked them what was going on and some teenage girl helpfully told me, “Logan Paul.” “I have no idea who that is,” I said, rolling my eyes, even though it sounded like the name of a gay porn star. When I got back to my apartment, I Googled him and found out that he was some kind of “Internet celebrity” who was opening up a “pop-up shop” and on his Twitter feed was given to making such pronouncements as “New York is going to be next level!” “Next level what?” I thought. “Absurd?”
Apparently, opening up a pop-up shop is now on the same level as curing cancer.
All of this says some very disturbing things about our society.
One is the whole notion of “Internet celebrity.” Andy Warhol’s famous dictum, “in the future, everyone will be famous for 15 minutes,” has long since lost its power to shock. Now it’s more like, “everyone will be famous for one nanosecond” because that’s the length of the average attention span these days. Internet has killed not only the radio star, but also the TV star, the movie star and, as I once sang, the gay cruising bar1.
All of this may seem like a tempest in a teapot. I mean, after all, what harm has this guy done? How is this any different from, say, teenage girls from another era screaming about The Beatles? Well, let’s see… The Beatles recorded the greatest body of work in pop music history and this guy did what exactly?
But it doesn’t even make a difference because fame is its own raison d’etre and, once you’re famous, it doesn’t even matter why. How many people remember (or care) that Kim Kardashian was initially famous for appearing in a sex tape? (Kim has her own retail store in my neighborhood, by the way, one that’s been open for several years now. Take that, Logan Paul!)

And a reality TV star is now our president!
Nowadays, anyone who makes a funny video or has their picture randomly wind up on the Internet is offered movie deals and commercial endorsements and is then forgotten about 15 minutes later. (I’m looking at you, Chewbacca Mom.)
The other disturbing thing is what this says about retail, the economy and New York City in general.
The whole notion of a “pop-up shop” is disturbing to me because it indicates that retailers can’t even commit to a long-term lease anymore, just the way that employers (including my former employer) can’t commit to hiring someone long-term.
Then there’s what it says about New York City itself. New York has become one big three-dimensional advertisement where it’s no longer even about selling merchandise but establishing a presence for your “brand.” This has led to the phenomenon of “high-rent blight,” where storefronts in some of New York’s most expensive neighborhoods have remained empty while landlords wait for a chain store to sign the lease.
The third thing that’s disturbing is the mere fact of people waiting on line for something as silly as an Internet celebrity. But on any given day, you can see several of these lines in my neighborhood: people waiting to buy cronuts, people waiting to buy sneakers, people waiting to buy poké bowls. Is this really how you want to be spending your time?
I guess people are desperate for something, anything, to fill their spiritual emptiness and the easiest way to do that seems to be by buying something. (I keep thinking of the Clash song, “I’m All Lost in Your Supermarket.”)
One of my Facebook friends commented about the people on this line, “Hey, at least they didn’t vote for Trump” and he was right. They were too young to vote for Trump.
But Trump has lowered the bar for the presidency so much that the fact that The Rock is now rumored to be running for president seems like an improvement. (Kid Rock’s run for the Senate, on the other hand, not so much.)
But, hey, what do I know? I’m just an old man.
Now where can I get one of those Logan Paul T-shirts?