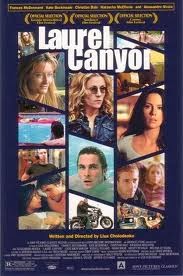 California dreamin’/On such a winter’s day.
Truer words were never spoken. And it’s only fall!
This is why last night I found myself watching Laurel Canyon, Lisa Cholodenko’s 2002 slice of neo-hippie SoCal living, on the Sundance Channel. I’d seen it before, but it holds up well to repeat viewings.
The movie is seductive because it touches on so many forbidden pleasures: California, drugs, bisexuality. From the opening shots of Laurel Canyon Boulevard winding through the hills above Los Angeles, with its quaint Canyon Country Store and rows of old-fashioned mailboxes, I was sucked in.
In the movie, Christian Bale plays Sam, a recently graduated psychiatrist from the stuffy Northeast who moves to Los Angeles to start his residency in a local hospital, bringing along his equally stuffy girlfriend, Alex (Kate Beckinsdale), who is doing a dissertation on genomics.
While in town, they plan to stay at the vacant Laurel Canyon house of Sam’s mother, Jane, a record producer played by the always-entertaining Frances McDormand. Unfortunately for Sam (and fortunately for his girlfriend, as it turns out), Jane is recording an album there with a band fronted by Ian McKnight (Alessandro Nivola), a man 16 years her junior that she also happens to be fucking.
During the course of the movie, Sam develops an attraction for Sara (Natascha McElhone), one of the female residents at the hospital, while his girlfriend develops an attraction for Ian. High jinks ensue.
This movie touches on so many themes that are near and dear to my heart, among them authenticity and the primacy of rock music’s place in the culture. There are no chain stores in Laurel Canyon in 2002, and I just read Graham Nash’s and Linda Ronstadt’s autobiographies, where they describe Laurel Canyon in the ’70s as being some kind of singer/songwriter’s mecca.
Then there’s the thrill of living vicariously through someone else (preferably someone else with more money), the same thing that originally attracted me to the Real Housewives of Orange County and reality TV, in general.
A lot of Laurel Canyon plays like some kind of lesbian fantasy, which is not surprising considering that Ms. Cholodenko also wrote and directed the lesbian-themed High Art. Two of the main characters are conveniently bisexual, which strains one’s credulity even more than the idea of Kate Beckinsdale doing a doctoral dissertation, especially when Frances McDormand’s character makes out with her son’s girlfriend in front of her own boyfriend. There may be such a thing as being too laid back!
But it sure is fun to wallow in a little uninhibitedness for a while.
Near the end of the movie, there’s the requisite mea culpa, with Sam vowing to save his relationship with Alex.
But then, in the last shot, he receives a call from Natascha McElhone’s character, who says, “What you said last night isn’t true. I can’t control my heart.”
Neither can I, Natascha. Neither can I.
Posted by thegaycurmudgeon at 12:48 PM No comments:

This morning I had an experience that might serve as an apt metaphor for my life, as well as the lives of many other people in our 21st-century, technologically-mediated world. The TV show Nurse Jackie, which stars Edie Falco (a.k.a. Carmela Soprano on The Sopranos), was filming in front of my apartment building. Now, in addition to being a huge fan of Edie Falco, I also have a real—if tenuous—connection to her in real life. We did children’s theater together on Long Island…37 years ago!
“What are the odds of Edie Falco being in front of my apartment?” I thought, conjuring images in my head of instant entrée to show business, camera bulbs flashing, velvet ropes parting. “Let me go across the street and say hello to her.”
Yeah, right! Like there isn’t someone on the staff on Nurse Jackie whose sole job it is to keep people like me away from her.
I showered and quickly got dressed (without eating breakfast), ran across the street and approached the PA.
“I know this sounds crazy,” I said, trying hard not to sound crazy, “but I did children’s theater with Edie Falco on Long Island.” The PA, who couldn’t have been more than 25, widened his eyes and said, “Cool.”
“I know you’re working and I don’t want to interrupt, but do you think it would be possible for me to say hello?”
“Well, we’re kind of busy shooting right now,” the PA said.
“Of course,” I nodded, assuming the air of a seasoned TV actor. “Do you mind if I watch?”
“No problem,” he said. “Just stand over there.”
He pointed me to a spot outside the gate surrounding the park where they were filming.
I peeked through the metal poles of the gate and, sure enough, about 15 feet away from me, I could see Edie Falco sitting on a park bench in her blue nurse’s scrubs and a camel-colored coat and Adam Ferrara sitting next to her in a blue police uniform.
I instinctively took out my iPhone and took a few pictures.
“How long are you going to be filming here?” I asked.
“About another half hour,” he said.
I was surprised they were going to be finished so soon. The last time I did extra work, I was on set 16 hours and I only did five minutes of work!
“Maybe I can come back later. I live right across the street,” I said, pointing to my apartment.”
“Sure,” the PA nodded.
I figured I would have a leisurely breakfast and come back in a half hour. Instead, I ran back to my apartment and frantically started trying to post the photo to my Facebook page from my iPhone, along with a pithy comment. The first three times I tried sending it, it didn’t go through. Shit! I hooked my iPhone up to my computer and tried sending it again. Still no luck!
Finally, on my fifth try, the photo went through, along with my painstakingly worded comment.
Then I looked out my window and, much to my dismay, saw that the crew was already dismantling the set.
I went back to the PA I had spoken to earlier and asked, “Did everybody leave already?”
“Yep,” he nodded. “They just left a minute ago.”
What TV shoot ever wrapped in 15 minutes?! That had to be the fastest shoot in the history of television!
It occurred to me that if I had just stayed 15 minutes and waited until they were finished filming, I might have been able to say hello to Edie Falco! Instead, I spent that time posting a stupid picture on my Facebook page! My chance at stardom was lost!
Oh, well. At least I had my Facebook photo. Proof that, for one nanosecond, I was 15 feet away from Edie Falco.
Posted by thegaycurmudgeon at 11:02 AM No comments: