Eating an Orange Is a Religious Experience

Posted by thegaycurmudgeon at 9:52 AM No comments: 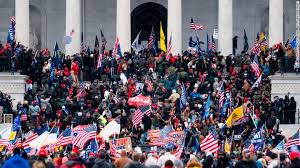 This is the Republican Party under Trump. We all watched this on live television and these images have been broadcast around the world. Is this still “fake news”?

We should have known this going to happen from the moment Trump came down the escalator in Trump Tower and called Mexicans rapists and criminals.

The lives of the politicians who promoted Trump’s lies were themselves put at risk. One person was shot and killed. But for Trump it was all just collateral damage. Just like the 360,000 Americans who have died from Covid because Trump said the virus was a “hoax” and told people not to wear masks.

He would have done this just to own the news cycle. Because normally, we’d be talking about the historic victory of two Democrats in Georgia.

But such is the extent of Trump’s pathological narcissism that he’s literally willing to kill people in order to hold onto power.

Therefore, our goal should be to change the law to prevent someone like Donald Trump from ever holding office again. The guardrails of our democracy, our so-called “norms and ethics” aren’t strong enough to withstand someone as ruthless as Donald Trump.

For example, all presidential candidates should be required to provide their tax returns in order to run for office. That alone would prevent Trump (and probably any of his family members) from running for president in the future.

But we also need to examine why people would be so angry that they would storm the capital.

Sure, there are tons of conspiracy theories out there, and these theories have been exacerbated by Trump and the right-wing media. But these theories wouldn’t take root unless people felt disenfranchised in the first place.

For a long time, we haven’t had majority rule in this country. Our institutions themselves are undemocratic.

Furthermore, most states have been gerrymandered to death. Why else would 147 Republicans feel like they could vote to overturn the results of a free and fair election and think they could get away with it? Because they know that Republican districts will stay Republican. And if they’re not sufficiently batshit crazy, they’ll be primaried by someone who’s even more batshit crazy.

Secondly, Democrats have come to be seen—rightly or wrongly—as the party of “coastal elites.” (It should be noted, of course, that there are people struggling on the coasts, too.) Democrats used to be the party of the working class.

How is it that Republicans—who have always been the party of giving tax cuts to the rich—came to be seen as the champions of working people? Yes, there may be an element of racism among “working class whites,” but we should remember (and the Democrats should be reminded) that the “working class” cuts across all racial lines.

The Democrats need to get back to their roots.

Maybe if we helped these people who stormed the Capitol—misguided as they are—they wouldn’t be so angry. (This is what I call the “Max Brooks” theory because I saw him make this suggestion on Real Time with Bill Maher.)

Maybe then we might be able to save our democracy.

But it’s going to take years—if not decades—to undo the damage Trump has caused.

Posted by thegaycurmudgeon at 11:39 AM No comments: