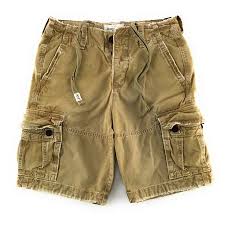 When I first saw you, you were hanging, by chance,
Off the ass of a muscle queen on line for Pier Dance.
Precariously suspended by inside drawstring.
How I wanted to have you! (The thought made me sing.)
The shorts, that is, silly! (OK, muscle queen, too.)
But not just any cargos. Old Navy would not do!
They had to be from Abercrombie & Fitch.
A perilous thought for this gay man (not rich).
So I trekked to the Seaport, the A&F store.
And bought myself two. (I couldn’t afford more.)
At last, I would be at fashionable heights.
And no longer feel scorned by fashion queen slights.
But somewhere in time, and against all odds,
These shorts came to stand for old men with dad bods.
Other styles came: dress shorts, gym shorts.
But still I stuck with you against other sorts.
Your pockets were hole-y, your legs they would bag.
I splashed myself peeing. I looked like a hag.
But still, I stuck with you, through thick and through thin.
And wondered when I could wear jean shorts again.
I saw said jean shorts on an old friend of mine.
And, wearing them, I thought he looked mighty fine.
Thoughts of Madonna and Sandra Bernhard.
Madame X wore them, and she’s no retard!
But jean shorts are older and even less stylish.
But I’m an outsider, so jean shorts I’ll buy-ish.
Posted by thegaycurmudgeon at 8:54 PM No comments: 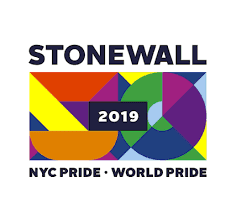 As the 50th anniversary of the Stonewall riots approaches, I’m filled with not pride but dread. Actually, I’ve been dreading this month for about a year. I read somewhere that the city was expecting six million rainbow-clad tourists to descend on the city for Gay Pride Month. As a claustrophobic loner, this doesn’t make me excited. It makes me terrified.
I suspect that more couples break up on Gay Pride Day than any other day of the year, just because there are so many hot men flooding the city, it forces one to reconsider one’s life choices. Ironically, it’s this same influx of hot new faces and bodies that makes it impossible to actually hook up with any of them.
If New Year’s Eve is a day that people are supposed to be happy and celebratory, Gay Pride Day is like gay New Year’s Eve on steroids. And this year is even worse because, everywhere you look, businesses are sporting rainbow flags and companies are making their corporate logos rainbow-hued. That doesn’t make me proud. It makes me feel like a failure for not measuring up to the popular image of gays as being financially successful. (The fact that I got “laid off” from my temp job three weeks ago isn’t helping, either.)
In fact, so great is a portion of the gay community’s disgust with the corporate takeover of Gay Pride, that this year there’s actually a counter-march to the official Gay Pride March, and it’s banning corporate sponsorship altogether.
The truth is, there’s not much to be proud of these days, whether you're gay or not. We currently have a president who, on a daily basis, is breaking the law and destroying the institutions of democracy in plain sight, and a Democratic Party that’s too spineless to do anything about it.
Right now, it looks like we’re set for a replay of the 2016 election. Joe Biden, the Democratic front-runner, is seen as the “safe” choice, but no one is actually excited about him. (Sound familiar?) Bernie Sanders and Elizabeth Warren are being labeled by Trump as “socialists,” as though “socialism” was a dirty word and we didn’t already have a number of socialist programs (Social Security, Medicare, etc.) that are wildly popular.
On his show last night, Bill Maher suggested (jokingly, I hope) that the Democrats nominate Oprah Winfrey, because America is now a nation of ignorant starfuckers.
So forgive me if I’m not in a celebratory mood this week, but right now I’m too worried about being able to pay my bills to celebrate.

Posted by thegaycurmudgeon at 7:07 PM 2 comments:

My First Night as a Cater Waiter 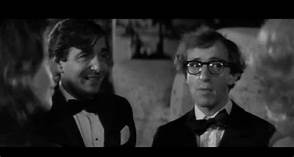 Among the temporary jobs I’ve had between “real” jobs were two years working as a doorman at a co-op building in the West Village and delivering newspapers (fine when you’re a teenager, not when you’re middle-aged). My life seems to be on a downward trajectory, since the publishing industry I’ve worked in for most of my adult life has completely collapsed.
I’m trying to “think outside the box” and consider other professions/industries I wouldn’t normally consider.
The most recent among these was cater waiter (which I will refer to hereon as “CW”). How was it that I had spent my entire adult life pursuing a career as a writer/performer and had never worked as a waiter or bartender? I thought it would be glamorous and exciting, and that I would bond with my fellow writer/performers, like on that Starz TV series, Party Down. If nothing else, I might get a good blog post out of it.
There was just one problem: I didn’t have any waiting/bartending experience.
No matter. Thanks to Craigslist and a CW agency in desperate need of people, I was booked for a major party at the Museum of Modern Art. The dress code was all black which, as a New Yorker, shouldn’t have been a problem. Nevertheless, I needed to borrow (and the agency was kind enough to lend me) a black dress shirt and tie. My only black dress pants were too tight and their lining was falling apart. They would have to do.
On my way there, I saw a veritable United Nations of people in black shirts, pants and ties heading north on Sixth Avenue towards the Museum of Modern Art. Could they be my fellow CWs?
When I got to the museum, I was given my assigned area and was asked to help set up. I started talking to some of my fellow CWs, most of whom were about half my age. (I did see one middle-aged woman, with whom I exchanged knowing glances.)
I asked if any of them had seen the Woody Allen movie, Manhattan, part of which was filmed in the sculpture garden in which we were standing. They all shook their heads, “No.” I didn’t dare ask them if they knew who Bella Abzug was.
My job was to circulate throughout the party, carrying a tray of hors d’oeuvres, which seemed easy enough. With my natural people skills, I took to it like a duck to water. But those hors d’oeuvres trays were heavier than I expected. I had to alternate arms to keep from developing tendonitis!
During a break before the event officially started, the head CW told everyone to stay by their station. I took this opportunity to check my email on my cell phone. Suddenly, I realized I was the only CW in the garden. When I went inside the museum, all the other CWs were eating and all the food was gone!
CW Rule Number One: Always find out when your dinner break is scheduled.
The party went well and the extremely attractive and well-dressed guests were very polite. But I couldn’t help but think, there’s nothing like serving extremely attractive and well-dressed people to rub your nose in your how unattractive and poorly dressed you are by comparison (my all-black outfit, notwithstanding).
The other CWs were nice, too, and I gathered that a lot of them knew each other from previous gigs, as they fist-bumped each other throughout the evening.
I guess there’s a certain kind of camaraderie among CWs after a while. I wasn’t there yet but, perhaps with enough experience, I too could enter this secret society!

Posted by thegaycurmudgeon at 3:36 PM No comments: 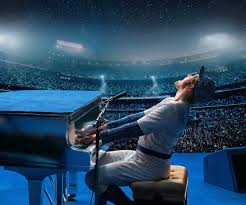 I can remember my first Elton John album. It was Caribou and it was a Christmas present. A few Christmases later, I got Captain Fantastic and the Brown Dirt Cowboy. The first rock concert I saw was Elton John at Madison Square Garden. The first time I sang in public, it was Elton John’s Your Song. A few decades later, I did a one-man show comprised of Elton John songs.
Among my musical heroes, John is number one after The Beatles. So, given my feelings about him and my expectations for Rocketman, my reaction was somewhat mixed.
Rocketman is like Bohemian Rhapsody, the film to which it will most likely be compared, if Bohemian Rhapsody was directed by Baz Luhrmann (Moulin Rouge); by which I mean, the characters burst into song even when they’re not actual singers performing onstage. I’m probably one of the only gay men who not only didn’t like Moulin Rouge, but thought it was ridiculous. (I don’t think I’ve actually seen the entire movie. If I wanted to see people do cover versions of famous songs, I’d go to a karaoke bar.)
But Rocketman takes more of an impressionistic look at John’s life. The songs are used to emphasize certain emotional beats, rather than to mark certain moments in John’s career. In fact, the songs are often used to illustrate events that took place before the songs were even written, which is kind of confusing.
Having said that, Rocketman’s producers hit the jackpot when they found Taron Egerton. Not only does he look like Elton John (down to his gap-toothed smile), but he can sing!
One of the things this movie does, aside from reminding us of the enormity and brilliance of John’s song catalogue, is to remind us that the young Elton was kind of hot! I don’t think Egerton is quite as chunky as Elton, but no matter.
The movie depicts, with welcome frankness, John’s sexual relationship with his emotionally abusive manager, John Reid (Richard Madden). The portrayal of John’s absent father (Steven Mackintosh) and withholding mother (Bryce Dallas Howard) also helps us understand what shaped John’s personality. So the familiar rock star trajectory of rise to fame, subsequent drug and alcohol abuse and eventual rehabilitation, doesn’t feel like a cliché.
There are certain moments—his Troubadour show, watching him write Your Song, his Dodger Stadium concert—when I actually got goose bumps.
The costumes (designed by Julian Day), which are based on of John’s actual stage costumes (many of which I remember), are also spot on.
At the end of the movie, we’re informed that John is retiring from performing, which is kind of a shock.
Good to know he hasn’t given up his shopping habits.
Posted by thegaycurmudgeon at 12:12 AM 1 comment: