This Ain’t No Disco 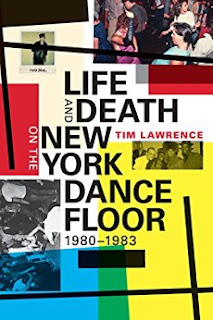 My life as a club kid was relatively short. It basically coincided with the year I attended NYU (1981), which allowed me to stay out late, and carried over into my first job at The Village Voice, which allowed me to go to New Wave nights at The Anvil on Tuesdays since I had Wednesdays off.
Similarly, the amount of time I lived in the East Village was relatively brief (the summer of 1980, plus 1981-1987). But, at one point, I was living next to the Fun Gallery (in Steve Buscemi’s old apartment), across the street from Jeff Weiss’s storefront theater, around the corner from PS122, and I was surrounded by dozens of art galleries and clubs.
Both these things were critically important in shaping the person I am today.
So when news of Tim Lawrence’s book, Life and Death on the New York Dance Floor: 1980-1983, popped up in my Facebook news feed, I couldn’t wait to read it.
The book does not disappoint.
I’m not alone in saying that Lawrence has written one of the most comprehensive and exhaustively researched books about this vitally important period in New York’s history.
The premise of the book is that this was a unique period for two reasons.
First, artists felt free to work in different mediums: everyone was an artist, musician, filmmaker and actor.
Second, and perhaps more important, is that this was a period when downtown met uptown, which is to say that downtown’s art/punk scene met uptown’s hip hop scene.
This resulted in an unprecedented outpouring of artistic creation.
And the place where a lot of that creation happened or was initiated was the city’s dance clubs.
I was more of a Mudd Club/Berlin person, but this book exposed me to a whole world I was barely aware of: clubs like The Loft, Better Days and Paradise Garage, that were more racially mixed, as opposed to the predominantly white punk/new wave clubs I went to or the almost exclusively white Saint.
One of the great things about this book is the inclusion of actual DJ discographies from this period. Now I like to think of myself as something of an ’80s music expert, but I usually only recognized about half the songs in these discographies (mainly the punk/new waves ones), and found myself scratching my head at some of the others.
I guess I led a sheltered existence!
But the reason why this book is so important is because it soon becomes abundantly clear that this period of New York’s history was a unique time that will never happen again (although Lawrence tries to paint a more hopeful picture).
In the early ’80s, it seemed like new clubs were opening up every week and that was just normal.
And, before the Internet destroyed everything, the only way to find about these places was by word of mouth, so they had time to grow and flourish before being ruined by yuppies. (I kid the yuppies!)
Ultimately, it was a combination of gentrification and AIDS, among other things, that drove most of these clubs out of business.
Nowadways, I’m ashamed to admit, I’ve become very middle-class, and I can’t be bothered dragging my ass to Brooklyn to go dancing.
And that’s the other thing that was great about the early ’80s in New York: all the clubs were in downtown Manhattan and downtown Manhattan was still cheap enough that you could afford to live there and walk to them.
There’s a passage near the end of the book where Lawrence describes what’s become of some club locations (the Mudd Club is now a luxury apartment, the Loft is now a J. Crew, etc.). It’s hard not to feel nostalgic.
As Lawrence says, “The contrast between the version of the city that used to attract moneyless people who wanted to build a life and the one where the best those without capital can hope for is to commute to its center to carry out jobs that will never enable them to establish a home in its increasingly exclusive landscape is dramatic and continually charges the fascination with this bygone era.”
Only someone who was there will recognize names like Roxy promoter Ruza Blue, Man Parrish’s band Shox Lumania or performer Kestutis Nakas.
Everyone else will have to read this book.
Posted by thegaycurmudgeon at 2:35 AM No comments:

Born at the Wrong Time

I just saw Danny Says, the new documentary about Ramones manager Danny Fields, and, while I enjoyed it immensely, I came away with the distinct impression that I was born at the wrong time.
Fields, for those who don’t know, is one of those people always who seemed to be at the right place and the right time for everything. (It also helped, of course, that he was extremely intelligent.)
As someone who likes to read biographies and see biographical films, there are at least two other people I can think of who seem to possess the same quality (coincidentally, they’re also music managers who were the subject of their own documentaries): David Geffen and Alice Cooper’s manager, Shep Gordon.
In the first chapter of his new autobiography, Supermensch, Gordon describes how, on his first trip to Los Angeles, he pulls into a hotel where Jimi Hendrix and Janis Joplin just happen to be staying. He eventually goes on to manage Alice Cooper (among others), and that, in turn, leads to a bunch of other careers.
In a similar fashion, David Geffen, after starting in the mailroom of the William Morris Agency in New York (after lying on his resume that he finished his degree), moves to Los Angeles and seems to fall ass-backwards into managing all the most influential southern California musicians of the seventies (Crosby, Stills, Nash and Young; Jackson Brown; Joni Mitchell), before going on to even greater success as a record label owner and movie producer.
As for Fields, he starts out as an editor for various publications (including teenybopper magazine, 16) while hanging out with the Warhol crowd, then becomes a publicist at Elektra Records (where he’s responsible for them signing Iggy Pop and MC5 in the same day) and later, after seeing them perform at CBGB, becomes the manager of the Ramones. He just seems to be at the center of everything that was happening in New York and Los Angeles in the ’60s and ’70s.
Why was Fields so successful, often in spite of his own self-acknowledged shortcomings?
Part of it is because, as the new book Love and Death on the New York Dance Floor, 1980-1983 says in its introduction, the real estate crash of the ’70s allowed artists to live in Manhattan cheaply. Furthermore, they were all clustered together in a few downtown neighborhoods (mainly Greenwich Village and Soho), and everyone, it seems, knew everyone else. New York was a smaller city back then. (The same thing, I suppose, could be said of Los Angeles in the ’70s, with its large musical community centered around Laurel Canyon and the open mic “hootenanny” nights at the Troubadour club, where many of them got their start.)
Part of it was because of the music industry itself, which has changed beyond recognition.
Nowadays, there’s essentially no music press (like everything else, a lot has migrated online) and record companies don’t exert nearly as much influence as they used to. Hell, people don’t even buy records anymore (or CDs, or mp3s).
I feel like I missed out on a golden age, just by virtue of being born too late.
Now, it seems, I spend most of my time grumbling about the good old days and how those days will never return.
Sure, maybe Danny Fields is old now, but at least he has something to show for his life (as do David Geffen and Shep Gordon).
There’s a line in the movie that I think sums up Fields’ philosophy pretty well. It’s when he says, referring to his job as a publicist: “It wasn’t a job. It was a role. Jobs can be replaced.”
Fields created his own career path.
And that may be the secret to surviving in these lean and boring times.
If, indeed, that’s even still possible.
Posted by thegaycurmudgeon at 7:08 PM 1 comment: