A Year Without Pride (and Jerry)

Normally, this weekend (and week and month) would be a time of celebration. But this year, as the entire world suffers from post-traumatic stress from the COVID-19 pandemic, it feels anything but celebratory. It didn’t hit me until I was walking home from Hudson River Park and saw the Pride flags along Christopher Street, and then it hit me like a punch in the stomach.
I know that there will be various “virtual” Pride events happening this year, but it won’t be the same. I will be “virtually” not attending.
This weekend (and week and month) is also triggering some very personal memories for me of one year ago.
It was one year ago this week that my partner, Jerry, spent his last few weeks as someone who didn’t know he had cancer.
I remember visiting him at Ty’s, the bar where he worked, after my catering job, and I could see he was miserable. He had been suffering from back pain, but we didn’t know that it was caused by a tumor on his spine. (We thought it was from working out.)
But Gay Pride Weekend was the most profitable weekend of the year for him, so he couldn’t afford to miss work. The next day he checked himself into New York-Presbyterian Hospital and, three weeks later, found out he had cancer.
Gay Pride Day is one of those days, like New Year’s Eve, where you feel almost obligated to be happy. But it can also be a day of immense sadness. I’ve often wondered how many couples break up on Gay Pride Day, what with all the eye candy that’s usually on display.
This year, at least, those who are in relationships won’t have to worry about any competition.
I know that, in the past, I’ve complained about the deteriorating production values of the Gay Pride March but, as Joni Mitchell said, “Don’t it always seem to go that you don’t know what you’ve got ’til it’s gone?”
Now I miss the crowds that normally make me claustrophobic, the corporate floats, the assless chaps, the whole lot of it.
And I’m reminded that, even though I thought I was doing OK in terms of getting over my partner’s death, that grief is a process, and I will probably have difficulty on other special occasions like our birthdays, Thanksgiving and Christmas.
Two days ago, I met with Jerry’s social worker, Daniel. I wanted to thank him personally for going above and beyond the call of duty, and we wound up talking for an hour and a half. It was interesting to hear his perspective on things. (I guess we didn’t have time to talk about it when Jerry was actually sick.)
It was interesting to hear him say how much Jerry loved me (even though I already knew that). He said that Jerry wanted to make sure I was “taken care of” after he passed away. (As usual, Jerry cared more about me than he did about himself.) Daniel also said that I helped him, because he knew that I would always be there for Jerry and be an advocate for him.
I suppose all of this is a reminder that I have a long road ahead.
So if you’re not feeling particularly “proud” this weekend, you have company.
Posted by thegaycurmudgeon at 7:00 PM No comments:

How to Lose Friends and NOT Influence People 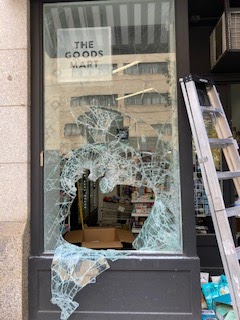 I couldn’t sleep last night because there was a police helicopter over my neighborhood until 4am and there were police sirens waking me up throughout the night. When I looked out my window, I saw two groups of people carrying clothes at 3am. Unless they were doing laundry at 3am, they were looting.
When I went to buy the newspaper this morning, I was confronted with scenes of destruction and vandalism that I haven’t seen since the 1970s.
And now I’m mad for what many would say is the wrong reason.
I’m mad because now THIS will be the topic of conversation (i.e., the looting) rather than what should be the topic of conversation (i.e., the murder of George Floyd, a black man, at the hands of Derek Chauvin, a white cop).
President Trump couldn’t have asked for a better outcome if Steve Bannon had planned this himself.
This is not how you get people on your side.
When I saw the video of Chauvin pressing his knee against Floyd’s neck for nearly nine minutes (while three cops stood by and did nothing), I was justifiably horrified (as, I think, anyone who’s not a sociopath was).
But this looting has left a bad taste in my mouth.
My theory (and I will wait until I see actual evidence of this) is that a small minority of protesters from the extreme left AND the extreme right hijacked a peaceful protest to serve their own purposes: the left to sow anarchy and protest the “establishment” (whatever that vague term means) and the right to discredit the civil rights movement and those seeking justice for George Floyd. BOTH of them are wrong to do this.
I was also upset by a Facebook friend of mine who claimed he found the experience of documenting the riots that ensued Saturday night “thrilling.”
That is not the correct response.
I’m uncomfortable with what I saw as a lot of poseurs taking selfies in front of burning police vans. When I saw news footage of one protester standing on top of a police car, I was reminded of the final scene in the movie Joker: anarchy for anarchy’s sake, with the Joker (or, in this case, Trump and Republicans) gloating over it.
I was similarly disturbed by scenes of looters—none of them carrying protest signs—breaking into stores and stealing merchandise. This isn’t about finding justice for George Floyd, it’s about taking advantage of a tragedy for your own profit.
I’m concerned that Trump will use this state of affairs to try to (wrongfully) portray himself as the “law and order” candidate. This is how every Republican since Richard Nixon has won the presidency (and how Rudolph Giuliani won the mayoralty of New York City).
Conversely, by bending over backwards to justify the behavior of the looters, New York City mayor Bill DiBlasio has come across as weak. This plays right into the hands of the police department that has said he “has blood on his hands.”
The only person I’ve heard properly address this situation is the (black) mayor of Chicago, Lori Lightfoot.
I still think Chauvin should be tried for first-degree murder (and the three other cops should be tried as accessories), but I feel uncomfortable with the response of many to this crime.

Posted by thegaycurmudgeon at 2:34 PM No comments: