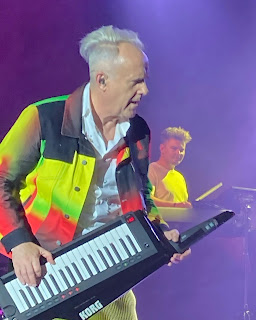 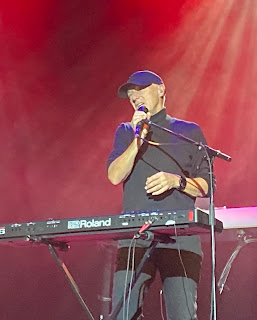 I went to see Howard Jones and Midge Ure at the Patchogue Theatre for the Performing Arts last night and a good time was had by all. I’d previously seen Howard Jones’s “acoustic trio” perform at Sony Hall in New York City back in February, so I already knew that he puts on a good show. He also strikes me as a genuinely nice person. (In fact, all the people I’ve seen in concert strike me as nice people. Maybe that’s part of their success?)

Anyway, I was looking forward to this “full concert” experience (as opposed to the “acoustic trio,” which nevertheless was able to produce a great sound) and Jones did not disappoint. Mostly.

He did perform a remixed version of “The One Who Loves You,” which was a bit of a disappointment for me, as I’d been looking forward to hearing it since February. (He didn’t perform it in his acoustic show.) I know artists need to keep things interesting for themselves as well as their audience, but I’ve listened to the original version a million times and was quite satisfied with it. (You may have noticed that I’m a bit of a control freak.) Fortunately, the hits were all there and the audience sang along.

The real surprise for me this time was Midge Ure, whom I never thought I’d see in concert ever, as I was convinced he was a studio creation, as was the stereotype about many ‘80s bands. (See my review of the Tears for Fears concert at Jones Beach.) Imagine my surprise when I saw that he could actually play guitar! And despite looking quite a bit older than his Ultravox days (I know, I shouldn’t talk), his voice was still perfect! In addition to playing several of his Ultravox hits, he really blew me away when he played Visage’s “Fade to Grey,” which he co-wrote.

It’s interesting that Jones decided to play Long Island and not New York City on this tour and I’m wondering why. I’m sure part of it has to do with the fact that WLIR, the former Long Island radio station (it’s now available online) was responsible (along with KROQ in Los Angeles) for breaking many New Wave bands in America in the ’80s. But I’m wondering if part of it doesn’t have to do with the concert business itself.

The reason I mention this is because, after I saw The Psychedelic Furs at Pier 17 on Friday (see my review), I checked Ticketmaster's website to see how much tickets would be for Blondie and Elvis Costello, who are also playing there. What I found was what was being referred to as “verified resale” tickets, which basically amounts to legalized scalping. While these tickets normally sell for $49.50, the cheapest ticket for Blondie was $114 and the cheapest ticket for Elvis Costello was $225. I would have happily paid $49.50 to see them, but since I’ve already seen both of them, there’s no way I was going to pay those outrageous prices.

A large chunk of the concert industry is controlled by one company, Live Nation Entertainment, which consists of Live Nation, which promotes concerts, and Ticketmaster, which sells tickets. That’s what’s known as a vertically integrated monopoly, and it’s supposed to be illegal. (The only thing they don’t own in this arrangement is the concert venues themselves.)

So while it may seem like I’ve been seeing a lot of concerts lately (and I have), it doesn’t look like I’ll be seeing many more—unless the tickets are more reasonably priced.

Posted by thegaycurmudgeon at 2:53 AM