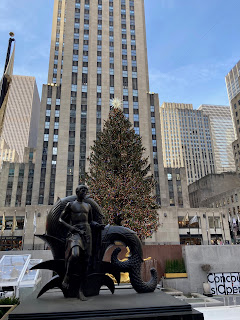 I took a walk to Rockefeller Center on my lunch hour yesterday and, in spite of it being less crowded than usual, I almost started crying. Why? Because this is supposed to be a joyous time of year and I was feeling anything but joyous.

And this is after we’ve been through almost two years of shutdowns, having to wear masks, and having to get vaccinated (to say nothing of the 800,000 Americans who have died).

It seems like every time we think we’re finally about to be done with Covid it comes roaring back even worse than before.

So, if you feel like you’re going crazy, you’re not alone. Along with the Covid epidemic, there’s been an epidemic of people dealing with mental health issues.

Just last week, the New York Times published an article about a website that instructs people how to commit suicide. Shocking, yes, surprising, no. (For the record, I don’t want to commit suicide, but the fact that I even think it’s necessary to say that shows how low we’ve sunk.)

Also last week, a tornado tore through several states in the Midwest, causing death and destruction. This was almost surely another example of the disastrous effects of climate change. Yet whenever Congress tries to pass a bill that deals with it, Republicans (and Democrat-in-name-only Joe Manchin) invariably vote against it. (President Biden’s infrastructure bill was a rare exception, but at this point it’s probably too little too late.)

Gun violence continues to wreak havoc on this country. In just the most recent example, two parents bought their child a gun for Christmas (who does that?!) and he then turned around and killed several of his classmates with it. And yet we can’t even pass a federal law that makes the parents of minors keep such weapons locked up, let alone renew the assault weapons ban.

Finally, as we approach the one-year anniversary of the Capitol Riot, Donald Trump and his allies seem likely to run out the clock (once again) and escape any accountability for trying to overturn the election results and promoting the Big Lie that the election was “stolen” (which the Associated Press just proved yet again has no basis in fact whatsoever).

Republicans have also been gerrymandering Congressional districts, restricting voting rights and installing political appointees to oversee elections in order to ensure Republican control of our government indefinitely, regardless of election results.

Democrats better start taking this threat to our democracy seriously RIGHT NOW or this will be the last Christmas we have one!

So forgive me if I’m feeling less than celebratory. But something tells me I have lots of company this year.

Posted by thegaycurmudgeon at 3:41 PM