Petrosino Park Is Out of Control 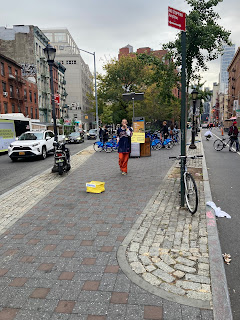 Yesterday I spoke to Christopher Marte, the man I hope will be my City Council member, about the deteriorating quality of life around Petrosino Park, a small, triangular park in Nolita that is bordered by Lafayette Street, Kenmare Street and Cleveland Place.

Despite numerous complaints to the Fifth Preinct and 311 from my neighbors and I, the situation has not only not improved, it has actually gotten worse.

There’s a general atmosphere of lawlessness in the neighborhood which the police say they’re powerless to do anything about. (I actually stopped a patrol car today to talk to them about it and they said that, while they agree with me, they can’t do anything about it.)

I seem to recall that it’s illegal to even play a radio in New York City parks, much less set up a microphone and amplifier that could fill a nightclub. But there seems to be a general lack of enforcement of “quality of life” crimes these days, as anyone who rides the subway can attest.

But amplified music is just one (albeit the most egregious) example of the deteriorating quality of life in my neighborhood. On the west side of the park, Lafayette Street has been converted into a de facto skateboard park with skateboarders shouting and banging their skateboards at all hours of the day.

The space that used to be Spring Street Natural Restaurant (it’s vacant now) is covered with graffiti. The non-profit Storefront for Art and Architecture was also covered with graffiti and had to be repainted several times. Perhaps the worst offenders are the restaurants themselves, particularly 19 Cleveland and La Esquina. 19 Cleveland has been operating past legal hours, has been doing construction at 23 Cleveland Place without a permit (at least none that I can see) and throwing rooftop parties late at night. They’re also expanding into the garden behind 23 Cleveland Place, again, without any permit or neighborhood input.

La Esquina has also been a horrible neighbor pretty much from the day they opened. I can always tell when they’re closing (2am) because their clientele seems to be incapable of leaving without waking up the entire neighborhood.

This whole outdoor dining phenomenon, which was supposed to be a temporary measure to help restaurants make up for income lost during the pandemic, has turned our streets and neighborhoods into all-day nightclubs, complete with loud music (and customers) and crowded sidewalks. I’m hoping that when they (hopefully) take office, Christopher Marte and Eric Adams can put an end to all this, because it’s clear that the Fifth Precinct and Mayor de Blasio have no intention of doing so.

Posted by thegaycurmudgeon at 6:58 PM