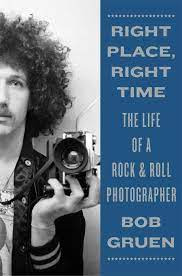 It’s not that I didn’t enjoy Gruen’s immensely entertaining autobiography about how a kid from Great Neck, Long Island wound up hanging out with the coolest people on the planet. (In fact, I tore through it in four days.) It’s that his very existence has me questioning my life choices.

Gruen’s book touches on three things that have been a major theme of this blog lately: 1) that I was born too late/born at the wrong time, 2) that New York City’s best days are long behind it, and 3) that rock music itself is now a matter of history.

As an avid reader of the biographies of creative people, it often seems in retrospect that they led charmed lives. (Actually, that also could have been the title of Gruen’s book: Charmed Life.)

To recount just one example from Gruen’s book, he talks about how one time he was working on the West Coast and he had to fly back to New York in order to do his taxes. If he hadn’t flown back to New York for those few days (remember, this was in the days before cell phones and personal computers), he wouldn’t have had an important meeting with John Lennon (who also happened to be his neighbor), resulting in a lifelong friendship and business relationship.

These kinds of chance occurrences happen throughout the book, whether it’s a childhood connection to musician Todd Rundgren or finding the Westbeth apartment that made his entire life possible.

This has caused me to question my own super-regimented life where I read The New York Times every day and know what I’m going to eat for every meal. A life, I might add, that’s completely antithetical to the kind of artistic life I’m trying to lead.

It’s hard to imagine Gruen ever having time to read a newspaper or watch television with his peripatetic lifestyle. Hell, it’s surprising to learn he even owns a TV set! (He does, but as far as I can tell, he just uses it to watch the videos he’s filmed.)

So while I go from one soul-destroying job to another in order to support my artistic endeavors, Gruen seemingly glides from success to success—although he strenuously argues otherwise. Yes, Gruen may have had a few soul-destroying jobs at the beginning of his career, but not his entire life!

The result is that Gruen’s work is now exhibited in museums and galleries, and he’s widely recognized as probably the most renowned rock photographer in the world. (I’m sure you’ve all seen his photo of John Lennon wearing a New York City T-shirt, among many others.)

And I’ve got a blog into which I can pour my musings on his accomplishments.

Posted by thegaycurmudgeon at 7:20 PM