Bros Blows Me Away 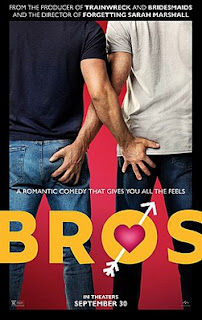 I was never a fan of Billy Eichner’s man-on-the-street interview show, Billy on the Street. But, then again, I never watched enough of it to know whether or not he was being serious about his infatuation with celebrities or whether he was sending it up.

I now have to admit that I vastly underestimated his talent.

Bros nails so many aspects of gay life and culture, it’s almost like an anthropological study. From the inantity of Grindr conversations, to gay stereotypes about masculinity (from which the movie get its title) to the ubiquity of gay men who aren’t “emotionally available,” this movie has it all.

It’s also the funniest movie I’ve seen since Trainwreck (which was also produced by Judd Apatow).

OK, so it strains credulity a bit to see Eichner hooking up with the impossibly gorgeous Luke Macfarlane (who, for you straight people, is like the gay John Cena). But it’s no less unbelievable than Amy Schumer hooking up with the actual John Cena in Trainwreck. After all, isn’t that what rom-coms are all about?

He even gives us the running reunion/finale that’s a feature of every heterosexual rom-com from When Harry Met Sally to Manhattan.

And, as if that wasn’t enough, Eichner can also sing (and has a great voice). I hate him!

In other words: go see Bros!

And, yes, I fully expect to be offered an acting and/or writing job after this review.

Posted by thegaycurmudgeon at 12:19 AM