The Mayor of Hudson River Park 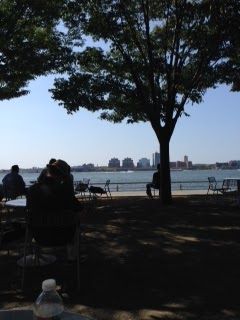 I’ve often considered myself the mayor of Hudson River Park, just because I go there so frequently and, consequently, feel very proprietary about it.
On this 15-degree day in the depths of winter, I’m thinking fondly of the summers I spent reading in my usual spot near West 11th Street. Since I usually can’t afford to take a summer vacation, reading in Hudson River Park is my summer vacation.
I’ve also met my fair share of celebrities while reading in the park.
Now, when it comes to approaching celebrities, I’m always torn between my fanatical worship of talent and my genuine desire not to intrude on anyone’s privacy. I don’t want to appear like a stalker but, on the other hand, I’m also loath to appear like some blasé New Yorker. As Rupert Everett once said, “Jesus could walk down Eighth Avenue and no one would notice.” (He was referring to Chelsea muscle queens and said this when Chelsea was still the preeminent gay neighborhood in Manhattan.)
Speaking of Rupert Everett, I can still remember the many times I’d see him and his dog on the Christopher Street pier. (This was in the pre-renovation days, when the piers were the exclusive province of gay men.) In fact, I’d see him so often that I grew to recognize his black Labrador and knew that, if I saw the Lab, Everett must be nearby. (The dog even made a cameo appearance in Everett’s film The Next Best Thing.)
Just this past summer, I met the actor and drag performer John (“Lypsinka”) Epperson. I mentioned that I had just posted a photo of a film clip of him that was used in a Morrissey concert on Twitter and that we also had a friend in common. He regaled me with his own tales of celebrities that he had met (Madonna, Bette Midler) and told me about his upcoming appearances at Feinstein’s/54 Below and off-Broadway in Once Upon a Mattress. (I saw Mattress recently and he was wonderful!)
Another time I saw Hedwig and the Angry Inch creator John Cameron Mitchell sitting quietly by himself, typing on his laptop. Actually, I had seen him several times and didn’t say anything because I didn’t want to bother him. Finally, I decided to tell him how much I had enjoyed his show when I saw it at the Jane Street Theater back in the ’90s. (This was before the Broadway revival was announced.) He was very gracious and I let him get back to work.
A few months later, I saw Mitchell in the park again on the day of the Tony Awards (for which Hedwig was nominated for the Best Revival and Best Actor Tonys, among others) and wished him good luck. He modestly deflected his nominations and, again, I left him to his own devices. A few hours later, I saw him on TV accepting the Tony for Best Revival.
Not every celebrity is so gracious.
A few years ago I saw the actor and playwright Sam Shepard eating an ice cream bar in the park. Theater snob that I am, I told him how much I enjoyed his play True West. (I deliberately didn’t mention any of his movie acting.) He ran away like I was a psycho.
It’s also true that not everyone I meet in the park is famous.
One person I see quite often is a vaguely homeless-looking man who’s always carrying a backpack and going through a pile of handwritten papers. He must be working on his memoirs! (I eventually saw him coming out of a building on West 11th Street, so I don’t think he’s homeless, either.)
Nowadays, my biggest concern regarding Hudson River Park (and the West Village in general) is overdevelopment. I was disturbed to read about the recent sale of air rights to pay for the renovation of Pier 401, as that will undoubtedly create yet more high-rises along the West Side Highway. (One of the biggest mistakes in zoning history has to be the fact that the West Village Historic District didn’t extend all the way to the Hudson River.) As it is, the behemoth-like 150 Charles Street looms over the charming townhouse on West Street that was featured in the Bravo TV series 9 By Design.
When I die, I’d like my ashes to be scattered over my favorite reading spot in Hudson River Park, so I can continue to enjoy its peaceful surroundings and future generations will be able to feel my presence.
It’s also likely to be the only way I’m ever going to have a Hudson River view.

Posted by thegaycurmudgeon at 2:32 PM